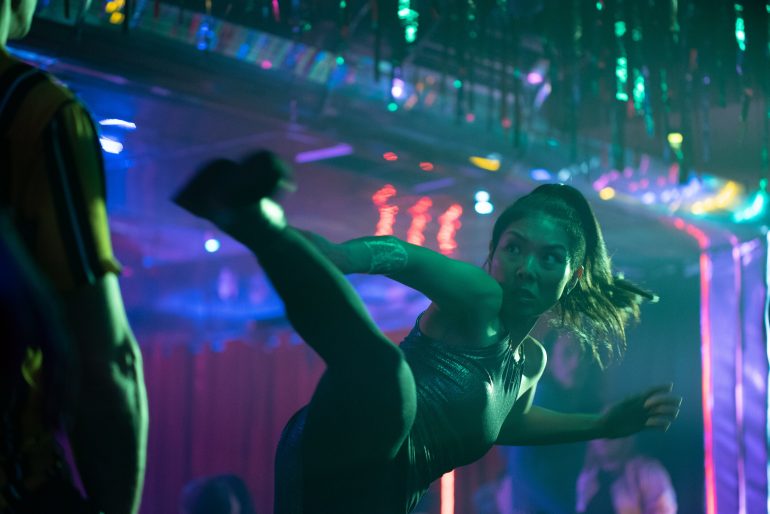 Yakuza Princess will likely be on my list at the end of the year for one of my favourite action pictures as it is visually arresting with regular bouts of graphic violence and an appealingly badass lead in MASUMI.

Plot: The heiress to half of the Yakuza crime syndicate forges an uneasy alliance with an amnesiac stranger who believes an ancient sword binds their two fates. She must unleash war against the other half of the syndicate who wants her dead.

MASUMI plays our lead Akemi, the heiress to a Yakuza crime syndicate who has no clue about her destiny but when all is revealed she takes the war to all in her path. She is immediately sympathetic making for an appealing lead and watching her decimate her opponents with her trusty sword is endlessly satisfying. Jonathan Rhys Myers is practically unrecognizable as the scarred and intense Shiro who Akemi reluctantly teams up with; we probably didn’t need to see him full frontal naked but that’s what we got.

Yakuza Princess is based on the Brazilian graphic novel Samurai Shiro and brings it to vivid life with certain moments lifted right off the page. Themes of loyalty, honour and coming of age are explored so it’s more than just a straight up action picture.

Tsuyoshi Ihara is almost inhumanly cool as Takeshi, the Yakuza loyal to Akemi’s father who wants to protect her from those who don’t want her to take her rightful place as head of the Yakuza.

Every scene of this movie you could take a screenshot and frame it as it simply looks stunning; filmed in Sao Paulo, Brazil it has an almost otherworldly atmosphere where most of the action takes place at night time with the music score perfectly chosen.

Like so many movies today the pacing does come to a bit of standstill in the middle but I was so busy soaking up the sumptuous visuals and murky atmosphere that I enjoyed every second.

Overall, Yakuza Princess may be one of the best action movies of the year with cool characters, stunning visuals and graphic violence; it’s very much open for a sequel so here’s hoping we get one which is even more crazy.