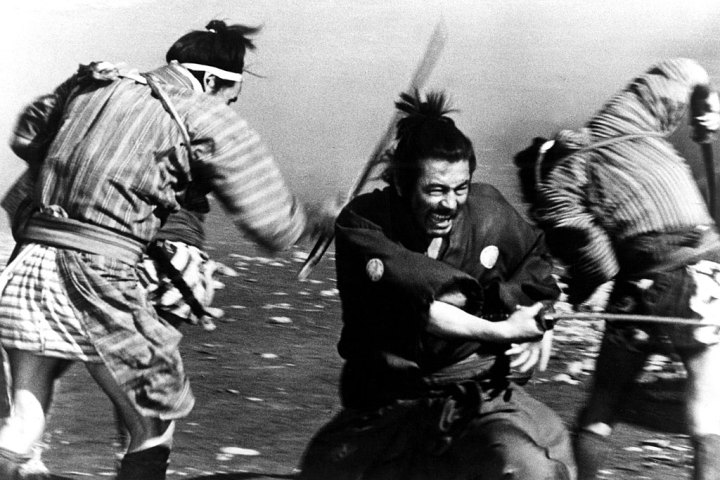 You may be wondering why I am reviewing old black and white films on here but without Yojimbo there would be no Fistful of Dollars, Last Man Standing, The Mandalorian and a plethora of samurai films as well as many other movies and TV shows that are influenced by the Akira Kurosawa classic.

I recently picked up the Criterion collection which features both Yojimbo and its sequel Sanjuro so let’s take a look below and see if they are worth buying.

Plot: The incomparable Toshirô Mifune stars in Akira Kurosawa’s visually stunning and darkly comic Yojimbo. To rid a terror-stricken village of corruption, wily masterless samurai Sanjuro turns a range war between two evil clans to his own advantage. Remade twice, by Sergio Leone and Walter Hill, this exhilarating genre-twister remains one of the most influential and entertaining films of all time.

Yojimbo (or Bodyguard) is a very familiar tale which has been copied many times since and it’s referenced by so many modern Hollywood filmmakers who have been influenced by its stunning visual style and atmosphere. It’s a mixture of East meets West which is why it translates so well into the Western genre featuring a lone stranger who comes to a town and pits two gangs against each other for his own advantage.

Toshirô Mifune was perfectly cast as the mysterious Ronin who goes by the name Sanjuro; he is incredibly fast during the swordfights but also gives him a brazen personality where he shows little to no respect to either gang boss. You know at some point his arrogance will be his undoing but Mifune’s sheer easygoing magnetism makes it hard to take your eyes off the screen.

The Weather always plays a big part in Kurosawa’s films especially wind and rain with the wind signifying change and the rain usually coming in during a climactic battle.

The music may be a little intrusive at times but I do love the main theme which once again has Western vibes.

There are so many iconic visuals in Yojimbo but one of the most famous is the dog walking past with the human hand in its mouth which Kurosawa wanted to add as it made the town feel immediately off. He came up with this idea after someone on set dropped a glove on the floor and it was added to the scene as it wasn’t in the initial script. I found this out in one of the documentaries on the Blu-ray which gives all kinds of great behind the scenes tidbits making it a must have for cinephiles.

Of course, what we care about here is action and Yojimbo has no shortage of swordfights with a few limbs being hacked off and blood spurting to keep viewers engaged.

There isn’t really anything else I can discuss about this movie that hasn’t already been said a million times by other, smarter people so I’ll just say if you like to know the history of our beloved genre then Kurosawa is a good place to start as his influence is felt even today. Just watch the episode Jedi in The Mandalorian and you’ll see what I mean. Yojimbo is still as entertaining as ever with Toshirô Mifune making for a magnetic lead and a story that still holds up.

Plot: Toshirô Mifune swaggers and snarls to brilliant comic effect in Akira Kurosawa’s tightly paced, beautifully composed Sanjuro. In this sly companion piece to Yojimbo, jaded samurai Sanjuro helps an idealistic group of young warriors weed out their clan’s evil influences, and in the process turns their image of a “proper” samurai on its ear. Less brazen in tone than its predecessor but equally entertaining, this classic character’s return is a masterpiece in its own right.

This sequel isn’t talked about or referenced as much as Yojimbo; I don’t think it’s quite as good as the first but it’s still a fantastic film with Kurosawa back to direct and Toshirô Mifune returning as the nameless Ronin (who still goes by the name Sanjuro).

This time Sanjuro helps a group of “9 stupid samurai” as one of their uncles has been framed and imprisoned by a corrupt superintendent. This generally has a lighter tone with Mifune at his surly best with someone describing him at one point as “insolent” which is the perfect description for him. He never seems overly impressed or concerned by anything other than eating and drinking sake.

There isn’t exactly wall to wall action but when the swordplay does come in it is quick and brutal; this is arguably more violent than Yojimbo with a climactic fight scene ending in geysers of blood. There is one sequence with Sanjuro taking out an entire group of enemies which still impresses to this day.

This was initially an adaptation of a Shûgorô Yamamoto novel called “Peaceful Days” but when Kurosawa was asked to return by Toho to create a sequel to Yojimbo he rewrote this script and the rest is history.

Both movies have superlative special features on the Criterion Blu-rays with a 2 part documentary series entitled Akira Kurosawa: It Is Wonderful to Create featuring interviews with cast and crew of both movies and giving a real insight into how Kurosawa worked. There are some great anecdotes making these features alone worth purchasing the Criterion edition.

Check out the full list of special features below:

Overall, The Criterion Collection Blu-ray of Yojimbo and Sanjuro is essential for all cinephiles but also for action fans who are interested in seeing how influential the character and story of Yojimbo are. The special features are fantastic but the movies themselves are also classics and arguably more accessible than Seven Samurai which may be too long for some tastes.