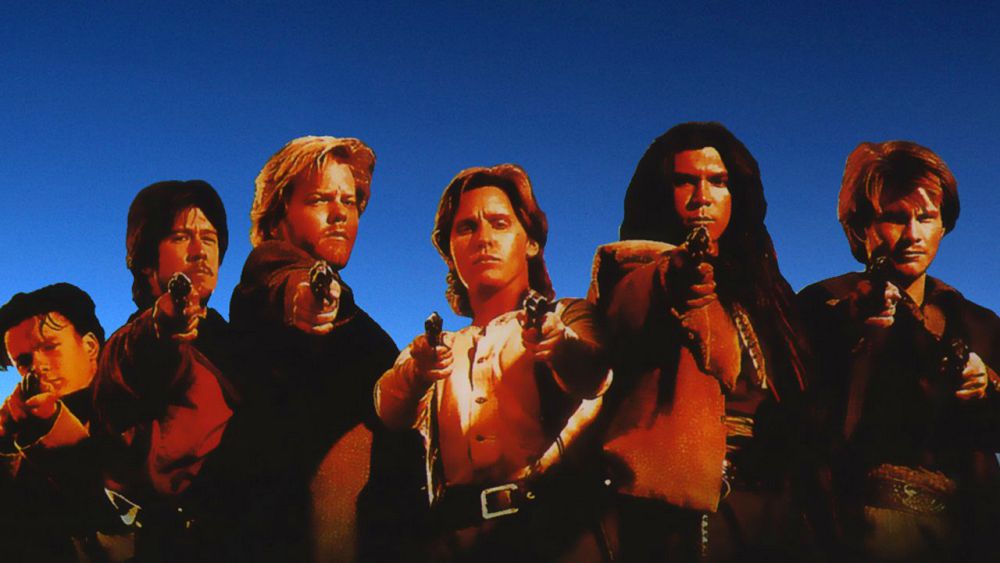 I consider both Young Guns and its sequel classic Western movies; they have amazing casts, cool music and entertaining stories which still hold up after many years.

The first movie turns 30 this year so what better time to take a look at them both and see which is the better movie?

Plot: John Tunstall (Terence Stamp), a distinguished British gentleman, employs downtrodden youths to tend his herd on the New Mexican frontier. When Tunstall is gunned down by the crooked Lawrence G. Murphy (Jack Palance), a ragtag group of cow hands — including Doc Scurlock (Kiefer Sutherland), Richard Brewer (Charlie Sheen) and young William “Billy the Kid” Bonney (Emilio Estevez) — ride forth in search of bloody vengeance for the death of their beloved mentor.

For me Young Guns will always be Emilio Estevez’ finest hour; he completely owned the role of Billy the Kid and was fabulously nuts giving off a Joker-esque laugh any time he kills anyone or is involved in a shoot-out.  Despite being quite unhinged you still kinda like him mostly due to Estevez’ on-screen charm. Young Guns also has a phenomenal supporting cast including Kiefer Sutherland, Lou Diamond Philips, Charlie Sheen, Dermot Mulroney and Terence Stamp. A tip of the cowboy hat must be given to Dermot Mulroney who is an absolute chameleon in this role; he is unrecognizable with his dirty teeth and look which was the opposite of what he was known for.

Jack Palance was always a fun villain and although L. G. Murphy doesn’t have all that much to do you still hated him enough due to Palance’s sheer acting ability.

Despite this being an ensemble piece my favourite character is Chavez (Lou Diamond Philips) who is essentially the moral compass of the crew and gives a sense of honour to it. Philips is one of my favourite actors and easily steals both movies.

One thing which was missing from both of these movies which may seem like an odd complaint was a love of the American landscape. All the best Westerns have lots of stylish epic visuals of the country where it feels like a character in itself but it lacks a little of that magic.

Young Guns still holds up and lacks any cheese so if you were to watch it for the first time now it would still seem fresh; the music is great too with a blistering score from Anthony Marinelli and Brian Banks.

In terms of action there are of course shoot-outs aplenty and the finale is still impressive; this is more violent than the sequel which was aiming for a more mass audience.

Overall, Young Guns is still a classic of the genre and for the cast alone it’s a must-see for Western fans.

Plot: En route to Mexico from the United States, Billy the Kid (Emilio Estevez) and his associates are pursued by federal agents hell-bent on bringing them to justice. But when Billy, Doc (Kiefer Sutherland) and Chavez (Lou Diamond Phillips) prove too difficult to track down, the frustrated authorities enlist an old friend of theirs, reformed outlaw Pat Garrett (William Petersen), to take down the elusive gunslinger. But Billy has a head start, and his crew of outlaws is growing by the minute.

It had been a while since I saw the second movie and I forgot how much I loved it. “Yoo Hoo! I’ll make you famous!” is now an iconic line and once again Estevez is electric as Billy. This time we’ve got Christian Slater, William Peterson, Alan Ruck, Viggo Mortensen and James Coburn to round off the already stellar cast. This one didn’t get great reviews at the time but I personally think it’s awesome and I think it’s better paced than the first movie too.

Christian Slater is a welcome addition and isn’t a particularly likable character which makes it more realistic; his ribbing of Chavez leads to a brief but entertaining fist fight and is one of the highlights of the film.

The ending is a little anti-climactic lacking the massive shoot-out the first one had and isn’t quite as violent. I loved the conflict between Billy the Kid and Pat Garrett who are former friends but Garrett is offered the job of Sheriff and accepts the task of hunting down Billy and his gang.

As stated this one seems a little tamer than the first movie and was clearly going for a bit more mass appeal but there is still plenty of action to keep things interesting.

Once again the music is fantastic and I’ve always enjoyed Blaze of Glory from Jon Bon Jovi and it is still one of his best ever songs. The score has that memorable theme tune as well which plays any time our crew does anything cool or badass.

Where the original movie has Jack Palance as the villain, the sequel has Pat Garrett who isn’t really a bad guy at all so there isn’t that same sense of threat.

Overall, Young Guns 2 has plenty to recommend it with another excellent cast and story is wrapped up nicely; it may lack the brutal action of the first but it is not without its moments.

Hmm this is a tough one as I think both movies are a lot of fun but I think I’ll go with the first as the shoot-out at the end is rather spectacular and the action more brutal.