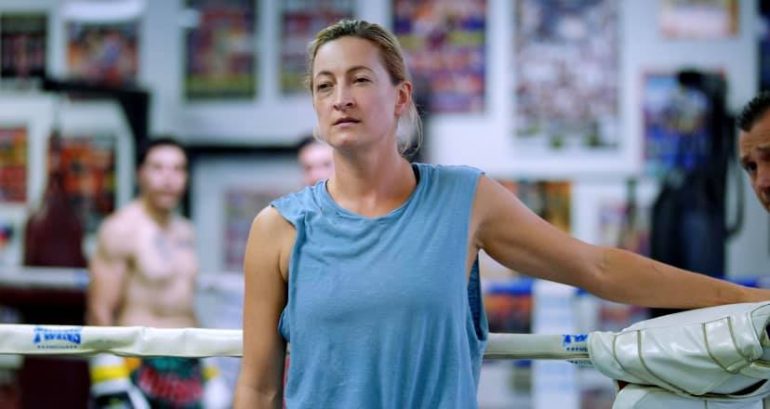 Zoë Bell needs no introduction here with her incredible stuntwork on the likes of Death Proof and Xena to name just a few, but also her performances in movies Once Upon a Time… in Hollywood, Camino and many more.  Zoë not only coordinates the stunts but acts in the new action drama entitled Haymaker from director Nick Sasso. Zoë stopped by yesterday and we chatted about the new movie.

What appealed about Haymaker for you?

First of all Nick Sasso – I had a meeting with him on Skype. I think I was just really sort of moved and inspired about his passion for this project, but also just he’s a total nerd for movies and I am so inspired by that. He had a real distinct vision; I don’t know why, but there’s something really attractive about a project with a distinct vision. There’s also something that makes you feel sort of safe, like, okay, this person knows what they want so I can bring my thing to it. If you’re walking into a situation and someone’s like “Oh I don’t know, I think I want to make a fight movie, but I don’t know what I want it to look like”. It’s much more relieving walking into a situation where someone’s got a clear vision and Nick really did.

Obviously, I love the Muay Thai aspect, the sort of Rocky redemption aspect of it. Then I love that the backdrop was this love story. There was something authentic about it. It doesn’t feel super Hollywood. I mean, the movie itself stylistically is stunning and glossy and full of colour. All the pieces that make it up are just deeply authentic. Nick being a fighter. Nomi being a pop star and trans and the fact that the love interest is trans, but that’s not what the movie’s about, was a definite selling point for me. I just love that I feel that’s not what the movie is all about is kind of what makes it so great. It’s like the difference between a female action movie and a great action movie with a lead who just happens to be a female instead of it being on the nose about it; the dude just falls in love with this gorgeous trans woman because she’s stunning, talented and amazing (laughs). It feels progressive without feeling preachy and I feel like that’s a really tricky thing. 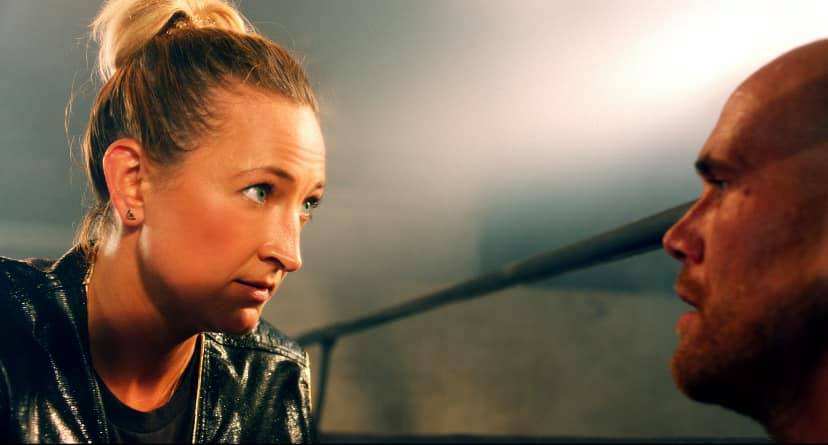 Absolutely. Yeah. It was just these two people who slowly fall in love and it’s sort of stuck with me. I love the characters.

Yep, exactly. I think there’s a genuine authenticity to the writing in the nature of the relationship. But also, Nick has not had an acting career before and Nomi was effectively playing herself so if you get that right, there is that sense of you do feel haunted by those characters because on some level you’re watching real people. There’s something profound about that.

What about your character Rosie? What can you tell us about her?

Rosie is just an old hand in the Muay Thai circles, and she was Nick’s coach for a long time, and he disappeared after losing a fight without saying goodbye. So she would take a bullet for him till the end of time. I think she’s a combination of disappointed and hurt. We don’t know what their specific personal relationship is, but just even as someone who cared about him deeply and was his coach; the coach/student relationship is a pretty profound one. I just love the idea of playing this character that would predominantly be an old man and having it be a younger woman and figuring out how to step into that seriousness without it being like “oh look, it’s a girl coach”. My basic research for that was if I was stepping in as a stunt coach, that’s my area of expertise and I had a student that I had sunk heaps of time into and heaps of energy. I was really all about them getting places and then they disappeared. What would that leave me feeling like? I think it’s kind of apparent that she kind of doesn’t quite know how to let him back in at first but once he’s back she’s just like “fuck yeah, let’s do this” (laughs), because that’s the nature of fighters.

Not only did you act, but you also coordinated the stunts as well. What was the process like for this movie?

It was an interesting one. I only took part really in the stuff that we shot in New York. So all of the Thailand stuff, I was shooting another movie somewhere else, and that was all non-choreographed. That was them shooting, real fighting, real training. So they were just covering all of that stuff. So that’s really great. That’s really those Thai guys. There’s nothing choreographed about it. When it came time for the finale fight, Nick’s original approach was to do it the same way. I was sort of like, “I would strongly suggest you don’t do it that way and if you want my help, I’d love to but I don’t want to stand on your toes” but he was like “no, no, no. Tell me, tell me”. If we’ve got a day or two to shoot the final fight and you’re the lead and Brett is fighting opposite you and we don’t have doubles for either of you. We don’t have a budget for doubles. We don’t have time for doubles. You’re also directing the movie, what if something happens? Martial arts and screen fighting are two different platforms. Fighting is the intention theoretically to take down an opponent. With screen fighting the intention is to make it appear that you’re taking down the opponent, but do the absolute opposite, because I’m going to need to do Take Three and Take Four and angle one, angle two and angle three. I need coverage. So, if we’re going to get these two people to work with, A) I don’t want them being hurt and B) the production couldn’t afford them to be hurt. So I worked with them on choreography, which is very different to just straight fighting; I worked with them on selling hits and distances and how close and far away you need to be from each other so it still sells on the camera and all of that kind of stuff. On the day, one of Nick’s ribs got broken like really early on in the piece because Brett’s got a fist like an anvil (laughs). He’s good at what he does. That was sort of the point; I was like, OK, so this is what we’re looking at. Thank God it wasn’t your face because now continuity’s screwed. So we have to work around what his physical capabilities were. He was looking pretty pale at one point and in a ton of pain. I sort of stepped up and he said “please take the reins, just tell me what to do, tell us where to be”.

There was a real collaborative camaraderie in that ring with us all working around the energy. Then there’s that kind of meta moment where in the film Rosie (I play Rosie) is in his corner as Nick’s (the character) coach and in real life we’re calling action and I’m calling things out to Nick and Brett and it’s Zoë speaking, not Rosie. It was weird but the energy; it was really satisfying working under those conditions with those personalities and Nick’s just a champ. 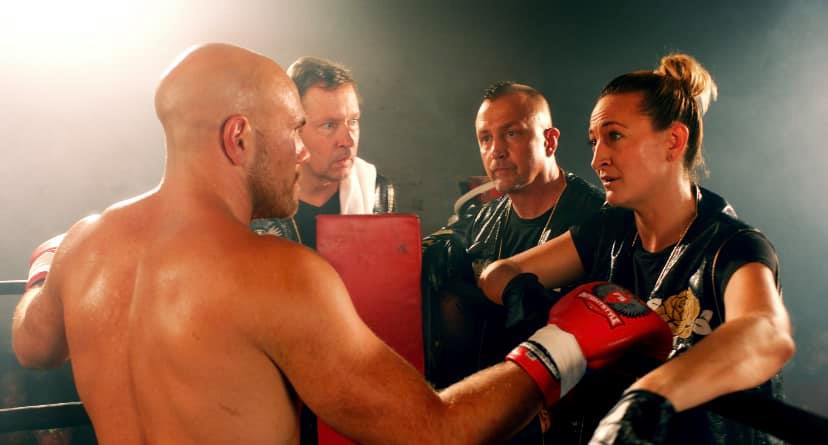 How do you find working on smaller indie pictures compared to bigger budget? You’ve worked on all genres/budgets so do you have a preference or do you just enjoy everything?

I just love the differences for what they are and they are vastly different. I do love in the indie world. I mean, there is a lot of stress financially in terms of lack of resources, usually across the board, as well as time, money or locations. You end up finding that that’s the case on the big budget ones as well. I think with indies it’s probably reminiscent of TV for me like on Xena back in the day where the turnover is kind of faster. There’s more thinking on your feet where something has to happen quickly if there’s a problem. There’s no “right, we’re going to stop production for a moment and think about it” because we can’t afford it.

I definitely get off on that kind of, that sort of, energy. I feel like so often sometimes it costs you things you want in a movie and you can’t have it and that’s heartbreaking. You have this great idea and are super dedicated to it and you can’t do it. Sometimes those moments of being strapped by lack of resources kind of opens up an imagination that you might not have had, had someone just been saying “yes” to everything you needed financially. So there’s that side of that of the indie world that I love. Big budget features have just got a different set of fun and certainly the places that you can reach and you can let your imagination run wild and technically potentially be able to fulfil it and execute because you’ve got the resources and you’ve got the people and you’ve got the man hours and you’ve got the time to rehearse. Probably one of my favourite things about big budget is rehearsal time. I love prep; it’s like whether I’m acting on it and I’m building up the character’s background, whether I’m coordinating or performing, coming up with the fight scenes or the action sequences and figuring out how that scene fits in the story and why this character is like that and so on. That is like the make-believe part and you get a lot more time to play with that budget, which I love. 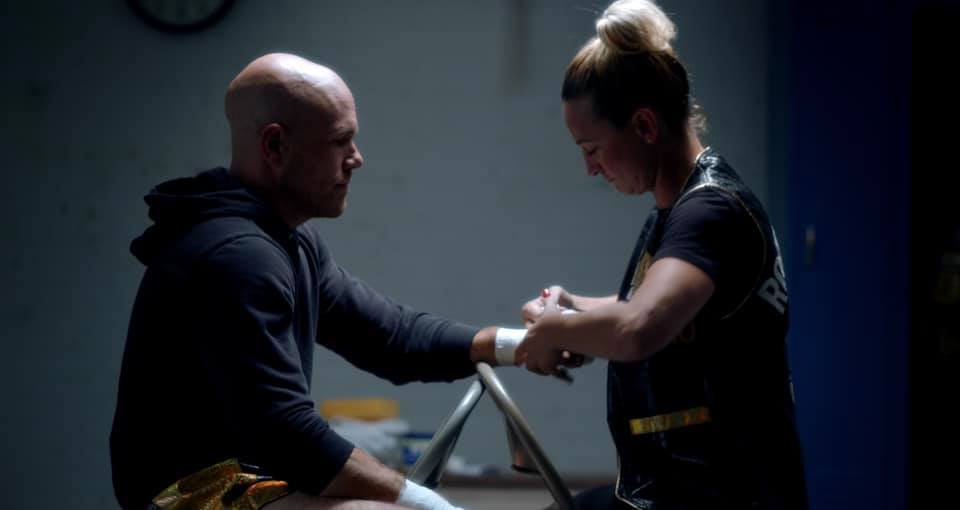 Finally, what would you like audiences to take away from Haymaker?

Hmmm, I kind of love the human side of it; I would love for audiences to walk away feeling like they had been on a crazy physical ride, that they had been pulled around the place in a love story. Just have that moment of realization that we are all human and human connection is probably the most important thing out there, especially these days and that comes in all different kinds of scenarios. Love can come to you in different forms and at different times in your life, whether it’s expected or not. Just being human is a condition we all have and human connection is above and beyond important in this world.

Haymaker will be released on January 29th in select theaters, VOD and Digital.