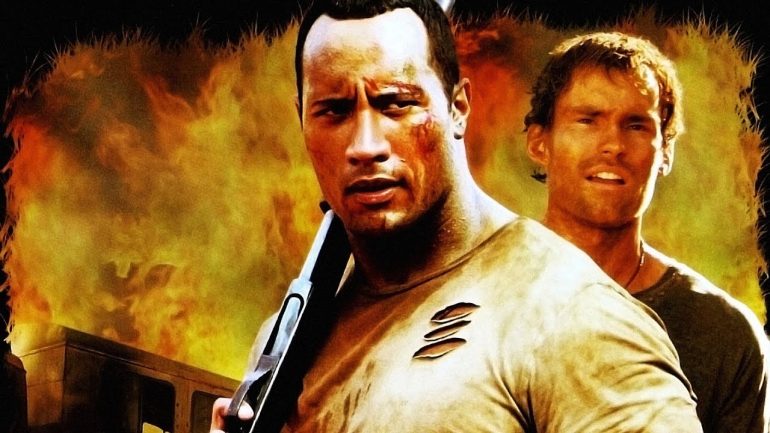 Plot: Beck (Dwayne “The Rock” Johnson) is a tight-lipped bounty hunter who doesn’t like to use a gun and accepts any job without asking questions. When Beck’s employer, Walker (William Lucking), sends him to the Amazon to locate Walker’s cocky son, Travis (Seann William Scott), Beck discovers a population controlled by a tyrannical treasure hunter (Christopher Walken). To survive, Beck and Travis must work together, without their affections for a mysterious rebel (Rosario Dawson) getting in the way.

Next on the I-can’t-believe-we-haven’t-reviewed-that-yet list comes The Rundown (or Welcome to the Jungle as it’s called in the UK) starring Dwayne Johnson, Seann William Scott, Rosario Dawson and Christopher Walken.

Directed by Peter Berg this was the movie that introduced us to Dwayne Johnson: The Next Action Hero and we even get a quick passing of the torch cameo from Arnold Schwarzenegger at the start… too bad Johnson has mostly done family friendly fare ever since. Like he cares though as he’s laughing all the way to the bank…

After 17 years The Rundown remains one of Johnson’s best movies as it has the right mix of comedy, action and sense of adventure. Dwayne Johnson and Seann William Scott make for a fun duo trading insults and blows although I do find Scott annoying after a while and he’s not a character I particularly took to. The humour is more juvenile with some jokes that work better than others, but it’s so tightly paced with practically constant action that it’s difficult to not be entertained.

I love Rosario Dawson in this; she manages to be stunning but also a total badass who can take care of herself and even when she’s captured by Hatcher in the finale, she still never becomes a damsel in distress.

Any movie with Christopher Walken as the villain gets two thumbs up immediately and Hatcher is one of my favourite characters especially for the “tooth fairy” scene which is the most Walken-iest scene you’ll ever see.

There is some impressive stuntwork although you’ve gotta love action movie logic; the scene with Beck and Travis jumping out of the jeep and falling down those hills would kill them both but in true action movie style they get up and brush themselves off like it’s nothing.

Keep your eyes open for the awesome Ernie Reyes Jr. who plays Manito which is a small but enjoyable role.

This is just me nit-picking but I could never be bothered with Ewen Bremner’s Declan who is putting on a pointless Irish accent; admittedly it’s not the worst but Bremner is from Scotland and making the character Irish meant nothing to the story so he should have just used his own accent without any detriment to the film.

Although it’s hardly classic the music score is decent; it lacks a memorable theme but that tends to be the way of things these days sadly and it works for this kind of movie.

Beck is one of Johnson’s best characters and we easily could have had a sequel; I even did an article about a stupid idea I had for one once. I like how Beck is against using guns giving us some nice foreshadowing that during the finale he’s going to use guns and kick some ass. I was always surprised this got a PG-13 rating as it has a pretty serious bodycount. The final 20 minutes has Beck go into one-man army mode and it’s satisfying stuff. I still think it isn’t too late for a follow up as you could have Beck retired and happily running his restaurant and but he has to come back for one last job. I know Peter Berg has wanted to do a sequel for a while now and he also was looking for Jonah Hill and Kevin Hart to join it; that was back in 2016 so I wouldn’t be waiting on that happening any time soon.

On a side note Dwayne Johnson really must like the jungle though as practically every movie he does is involved with it from The Rundown to Jumanji to the upcoming Jungle Cruise.

Overall, The Rundown is still a fun ride and remains one of Dwayne Johnson’s best films with some fun buddy banter, crazy action and a scene stealing villainous turn by Christopher Walken.